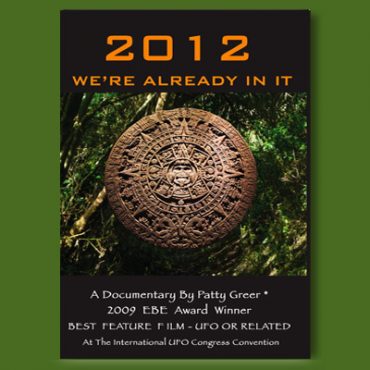 2012 - We're Already In It offers a rich medley of interpretations of the Mayan Prophecy, sacred geometry, pole shifts and new science technologies. Respected experts and druid from around the world offer poignant predictions and perceptions about our future on Earth.

Bringing to light the mysteries of our shifting realities we highlight many aspects of ET life here on earth. Communications from other worlds through the Crop Circles and physical Contact are good examples that often leave physical evidence. We address the obvious challenges we face today as a planet run by greed and ill-placed political power.

Focusing more on a New Paradigm Reality of higher consciousness, mental telepathy and world peace ~ we suggest non participation in those (greed) aspects of life altogether. One person at a time everything is finally changing!

Winner of the “2009 Best Feature Film-UFO Or Related EBE Award” at the International UFO Congress Convention, and the “Silver Sierra Award” at the Yosemite Film Festival. This movie sold out the theater at the 2010 Glastonbury Symposium in England, and has received rave reviews from around the world ever since.

NOTE: After completing your Streaming purchase you will receive an email confirmation which will have a link in the description area which states: VIEW VIDEO HERE - 2012 - We're Already In It