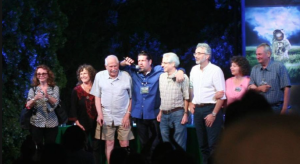 After “Crop Circle Diaries” exposed this timely data I became the most hacked UFO filmmaker in history in 2016. Must be a pretty important movie! Crop Circle technologies have the ability to improve the world's food and biofuel supply immediately. By understanding the plasma effect on Crop Circle seeds the game changes and we can bring our organic food supply back quickly. The spinning plasma frequencies caused the seeds to grow              30 -400% more food and biofuel per plant, with up to 50% more nutrition  per seed.

Last year David Wilcock introduced Patty on his CITD panel as, “Patty Greer has done videos and seminars and she is certainly one of the leading crop circle researchers, if not the pre-eminent researcher of our time!”

This year Jimmy Church wrote on social media “Patty hit it out of the park on our UFO Disclosure panel, but we knew she would.”

View all posts by: Patty Greer

Known Issue & Solution: FROM THE CART, PLEASE CHOOSE DOMESTIC SHIPPING IF YOUR ADDRESS IS IN THE US. OTHERWISE IT MAY DEFAULT TO AUSTRALIA AND EXPENSIVE SHIPPING.

Also, some people have reported problems with being able to view their streaming video link upon purchase. If you are someone who experiences such issues, please contact us at info@cropcirclefilms.com and we will give you access immediately. We are working to resolve these issues and we thank you for your patience and understanding.